A bias-T is required to feed DC and control signals to a satellite TV LNB. This allows the co-axial cable that transports the signals down from the dish, to be used to power and control the LNB. The name "bias-T" was originated back in the valve (vacuum tube) era where this simple circuit was used to inject DC bias to control electrodes in parts of the circuit that were also carrying RF.

At its simplest a bias-T consists of two components: a DC blocking capacitor and an inductor. 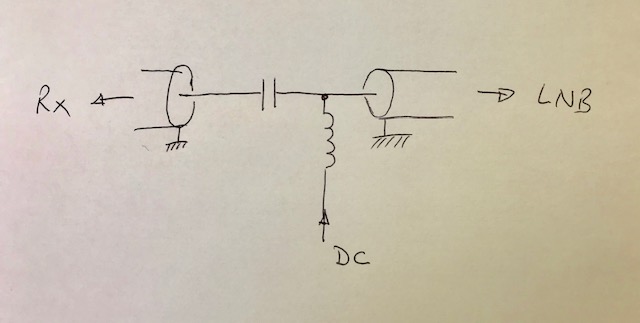 The capacitor goes in series with the inner of the coax and has two roles:

1) it stops the DC voltage being transferred into the receiver.

Choice of the capacitor will include its voltage rating (usually > 25 Volts in the case of an LNB) and its potential signal loss. The loss will be due to dielectric loss and  the impedance of the capacitor at the signal frequency. Usually a ceramic capacitor will be used. A chip C with a self-resonant frequency above the IF frequency (around 750 MHz for Es'Hail 2) is a good choice. The best dielectric would be C0G or NP0 but X7R seems to work just fine too. I used a disc ceramic of unknown dielectric with no issues.

The value of the capacitor should be such that its impedance at the IF frequency is less than 1/10th the characteristic impedance of the transmission line that it's in. In this case that would mean less than 7.5 Ohms at 750 MHz. Any value from 33pF to 220pF should be fine. 100pF would be a good choice (Xc about 2 Ohms).

The inductor does the reverse of the capacitor. It passes the DC current but does not pass the RF. In this case the value of the inductive reactance should be at least 10 x the characteristic impedance of the transmission line (> 750 Ohms). This means that the inductance should be greater than 180 nH. An 8 turn coil 5mm diameter 5mm long would work well. Care should be taken to ensure that the self resonant frequency of the inductor is at or above the IF frequency.

The bias-T can be built on a scrap of PCB using normal RF techniques (shorts leads). Ideally it should be in a screened enclosure to avoid unwanted IF pickup.

The LNB local oscillator frequency is normally 9750 MHz (for Es'hail 2). For other applications it can be switched to 10.6 GHz by injecting a 22kHz square-wave (0.5V p-p) along with the DC. LNBs take a current of between 50 and 200mA.